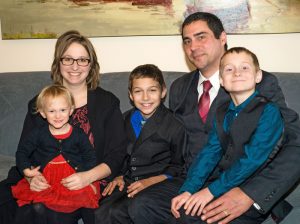 After a troubled youth, Pastor Mason found his calling to preach the gospel when he was saved at 19. He has a burden to see solid, New Testament, local churches established in northern Michigan and has spent most of his time in the ministry building small churches specifically in the Upper Peninsula. He also believes in being involved in and serving his community. He aids people of all beliefs and from all walks of life and enjoys many outdoor pursuits, including hunting, fishing and trapping.

Pastor Mason and his wife, Naomi, have three children: Nathanael, Jeremiah and Eliana.